skip to main | skip to sidebar

ok. so...short story is that ive decided to do a few songs with janes addiction at the nme awards show. they are honoring the legacy of janes and therefore i have decided to participate. i have kept silent this past week about it because i was concerned that if it got out that i was even considering it, that in itself would have been considered an answer and i didnt want to set this in motion until i had really decided either way. so i am sorry for the lack of response to your questions on the blog here.

i went to do dave navarros internet tv show today thinking that i might get some clarity about all this from talking to him. i had only spoken to two other folks about this up to that point. i was really conflicted and i am still unsure that this is the right answer (if there is such a thing) but i am happy to be a part of honoring janes. i am humbled that we are being put into the company of the others who have received this honor from the nme. and finally, i must admit that it has felt really good so far in both heart and mind; just sounds like a cool night. amazing.

over the years, one of the things that has always struck as me as strange is that interviewers have always seemed reticent to ask you questions about the lyrical content of songs. they have told me that musicians generally dont like it. odd to me. what do we talk about if we dont talk about the work. short answer: everything but the work. i bring this up because i have just finished a week of roaming around doing press and i cant remember anyone asking me about the content of any of my songs. and it isnt because people hadnt done the research. i was pleasantly surprised how much the interviewers were generally intelligent and well informed. i just think we as an audience have become so fascinated with celebrities themselves that we just arent as interested in their work. of course, i think alot of interviewees are also culpable for all the fluff content. im just not interested in how much fun an actor had on the set of a movie. but i will inevitably hear that in any interview. wow. now this getting rambly preachy AND pointless. occupational hazard of blogging. im off today to do dave navarros internet tv chat show.
Posted by -ea. at 11:09 AM 10 comments:

today its thursday. which means it must be west palm beach. a radio station called wpbz. tomorrow its chicago cleveland then home by friday night. is it just me or did they decide to populate all the new york city press outlets with really capable smart women. very cool. very different from when i began. there are ,of course, many mitigating factors. one of which might be that it was all online stuff; zoom in, mtv, vh1 radio, aol. when its online stuff it gets immediately brainier and i feel considerably more comfortable in conversation. but that was then and this is now. i must take leave. off again. caffeine, radio station, airport, rinse and repeat.
Posted by -ea. at 9:36 AM 33 comments: 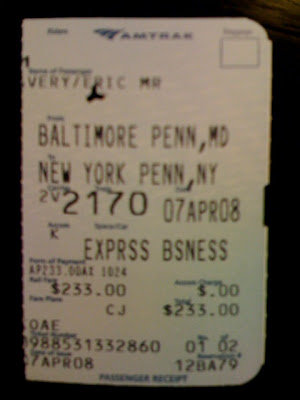 its here. finally. the record drops today. typical of a day like today, i dont have time for a real post because i have to check out of the hotel in fifteen minutes. then its a zoom in, mtv.com,vh1.com etc. morning before going to providence this afternoon. also, for anyone interested in hearing a rambling and unfocused interview performance, im on wtmd this morning out of baltimore and then they will post a podcast of it. but i must go now. late, as usual. duty calls.
Posted by -ea. at 6:22 AM 15 comments:

again, after being stopped by the events of my life, i am restarted by the events of my life. after the last post, i have found everything i want to write next seeming trite. but this morning my hand is forced by the fact there is some music news to update. i begin a little press junket today, taxi is coming in half an hour, doing little bits of press and radio. shaking hands and kissing babies. not one of my stronger talents. but there is the word business in the phrase 'music business' and so i am off to lax. hello baltimore, nyc, providence, west palm beach, cleveland (of course), and chicago. home by friday. i go out the door today burdened by the privilege of an extraordinary life. it certainly didnt start that way. be well and thanks again for all the kind posts about bob.
Posted by -ea. at 10:25 AM 7 comments: